It took Tim and Maddy Doherty 18 months to get planning permission to build their dream home, but it was worth the wait. They have built a classic farmhouse on the border of Kent and Sussex and have been telling us how they did it.

Visitors to Tim and Maddy’s new house find it hard to believe that it was completed just a few years ago. The roof looks as if it has been in place for decades, the bricks as though they were handmade by ancient craftsmen. Even the path leading up to the front door appears to have been made in a previous century. Which, of course, it was because this is a house where reclaimed materials have been combined with the best in new technology to produce a ‘period’ farmhouse that looks as much a part of the landscape as the stream that runs alongside it and the rolling fields beyond.

Tim and Maddy bought the three-acre plot at auction. The plot had two old farm cottages on it and Tim and Maddy’s plan was for these to be demolished and replaced with one new house. This type of one-for-two replacement is generally permitted, but the cottages were sited near a railway line at the bottom of the plot, and Tim rang the local planning department to see whether the planners would allow the relocation of a replacement house further away from the railway. The planning office told him that in principle this would be acceptable and confirmed this in writing the day before the auction. 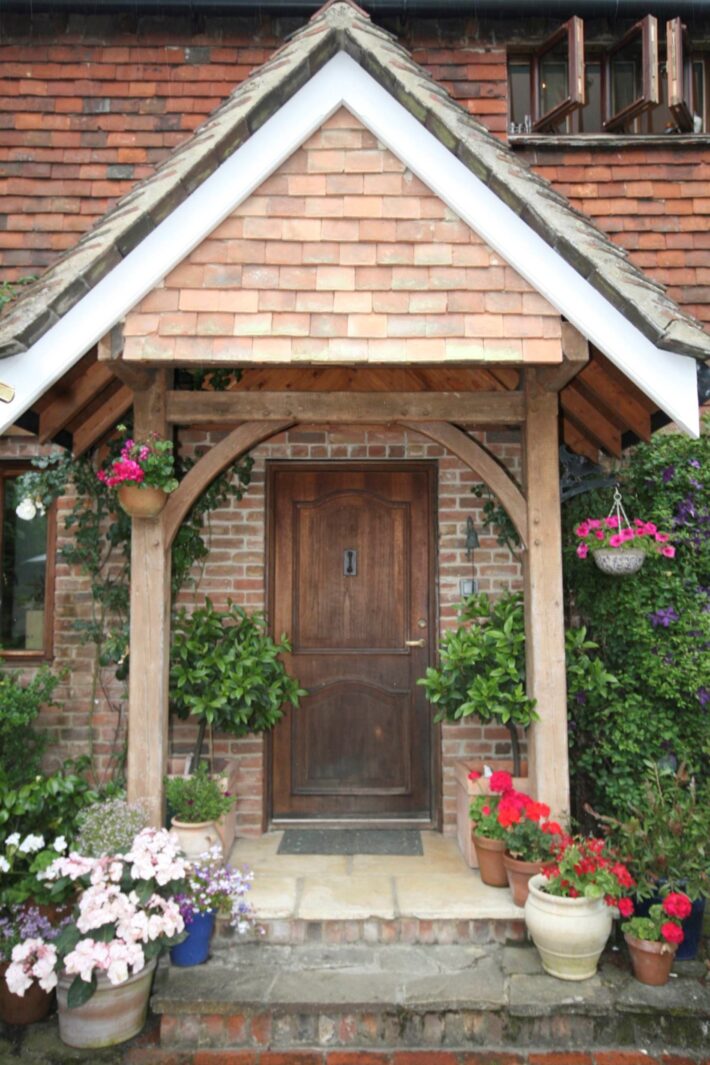 Once the plot purchase had been completed, Tim visited the council to informally discuss their plans. The planners now told him that they would like to see the new dwelling begin built near the top edge of the plot, close to a neighbouring farmhouse so that the Dohertys’ home would look as though it belonged to a single group of farm buildings. Tim and Maddy’s neighbour was not keen on this idea but fortunately, the Dohertys managed to persuade the planners to let them build further down the slope, away from the existing farmhouse. They were ready to submit their planning application. Unfortunately both the parish council and one of their prospective neighbours objected to the application, which meant that it would have to go before the full planning committee.

Following a visit to the site, the committee requested that further revisions be made to the plans and finally, just before Christmas, planning permission was granted. Tim then arranged to have a soil test done and it was discovered that the revised position for the new house was on filled ground which would be unsuitable for building upon. This meant another trip to the planners to seek permission to move the house some ten metres away, where there was fortunately good load-bearing sandstone. Tim argued that the new site would still be within the garden area set out in the permitted plans, and the planners were happy with this. 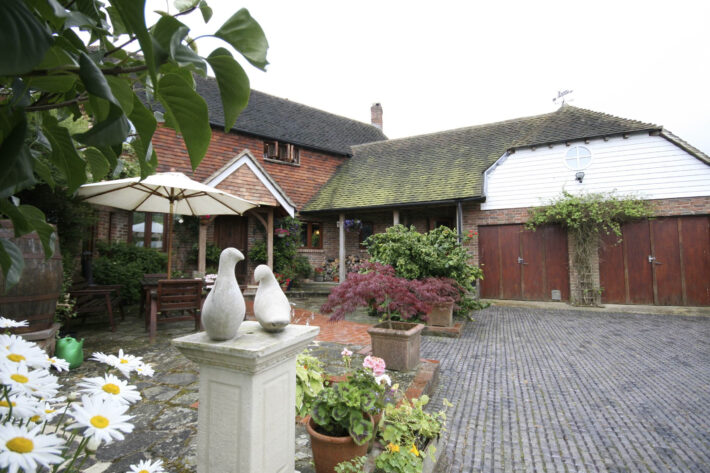 However, the new position involved setting the house into a bank, so a new, split level design was drawn up to suit this new siting, and a second planning application submitted. Again the application went to committee and again there were local objections. This time, the committee decided that the house was too high and prominent and deferred their decision pending amendments to the plans. Yet another design was produced, with a lower roof-line than the originally permitted house and totally in keeping with traditional rural housing styles of the area, but the committee was still not happy with the house position.

Rather than tinker any more with the design, Tim and Maddy decided to mount a charm offensive to persuade interested parties that their plans should be accepted as they stood. First, they had a meeting with the chairman of the parish council. Although sympathetic, he felt unable to support the scheme in principle, because the parish had objected to the first scheme. They also went back to a neighbour who had been objecting to the plans, but his attitude was so negative that the Dohertys felt moved to write to him setting out all the efforts they had made to come up with a positive solution and highlighting how consistently negative his stance had been. 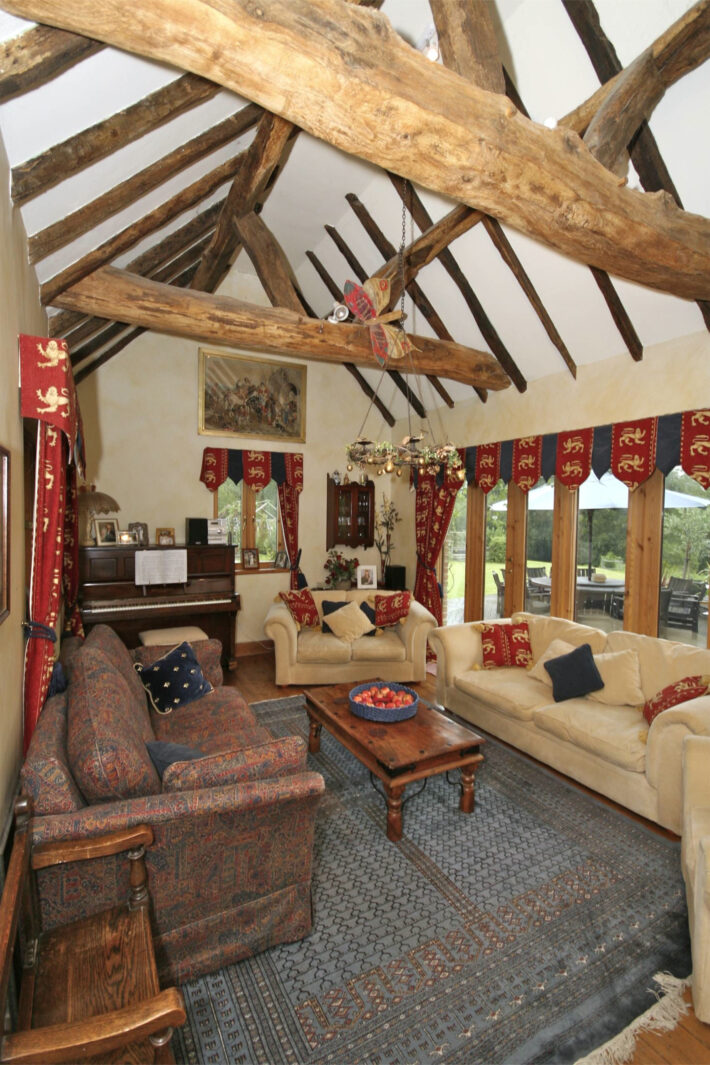 Determined to set the record straight, they copied the letter to the parish council, to their district councillor and to every member of the planning committee. As a result, at the next committee meeting, one by one, the councillors came out in favour, praising the design and pointing out the dangers of trying to build in the permitted position on filled land. The tide, finally, had turned and the scheme received a unanimous vote for approval. The whole process, from purchase to final granting of planning permission, took eighteen months. “By the end, I felt as though I’d taken a degree course in planning!” said Tim.

By comparison with the planning battle, the actual construction of the house was relatively straightforward, the complete build of the 3,000 sq.ft. house taking just nine months. Tim acted as his own project manager, hiring local sub-contractors to carry out the building work for him. Maddy’s brother Martin, an experienced Scandia-Hus carpenter, undertook all the carpentry work and acted as the on-site clerk of works. 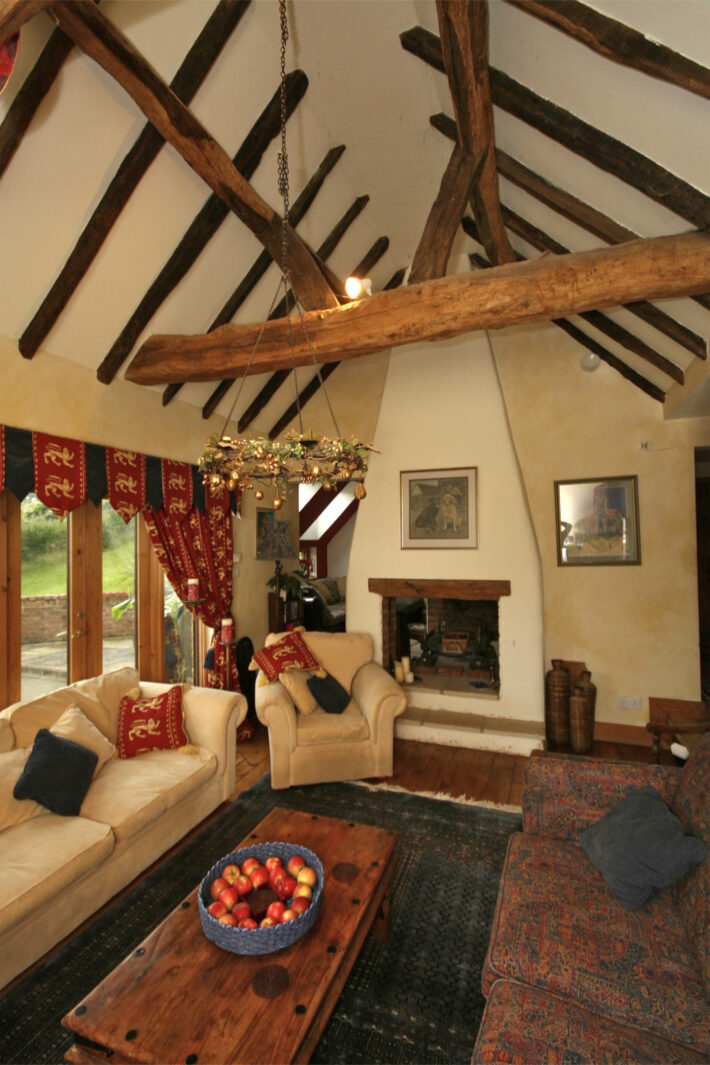 At the time of their build, Tim was working for Scandia-Hus, and it was therefore no surprise that Tim and Maddy opted for a top-of-the range Scandia-Hus design. “Overall energy performance was important,” Tim said, “and we also placed big emphasis on acoustic performance. All internal walls are filled with fibreglass insulation and finished with two layers of plasterboard to both sides, and a special acoustic flooring was laid between floors. The other thing we wanted to achieve was a ‘period’ feel and that is why we used reclaimed materials wherever possible.”

A curved tower feature has been built into the design to add interest to the exterior of the house, and stepping into the Dohertys’ entrance hall, the first thing you see is an old stone fire surround, which was bought at a local architectural salvage store. The floor throughout much of the ground floor is made from reconstituted stone. Tim said: “We wanted real stone slabs and the ones we chose have an authentic texture and patina.” 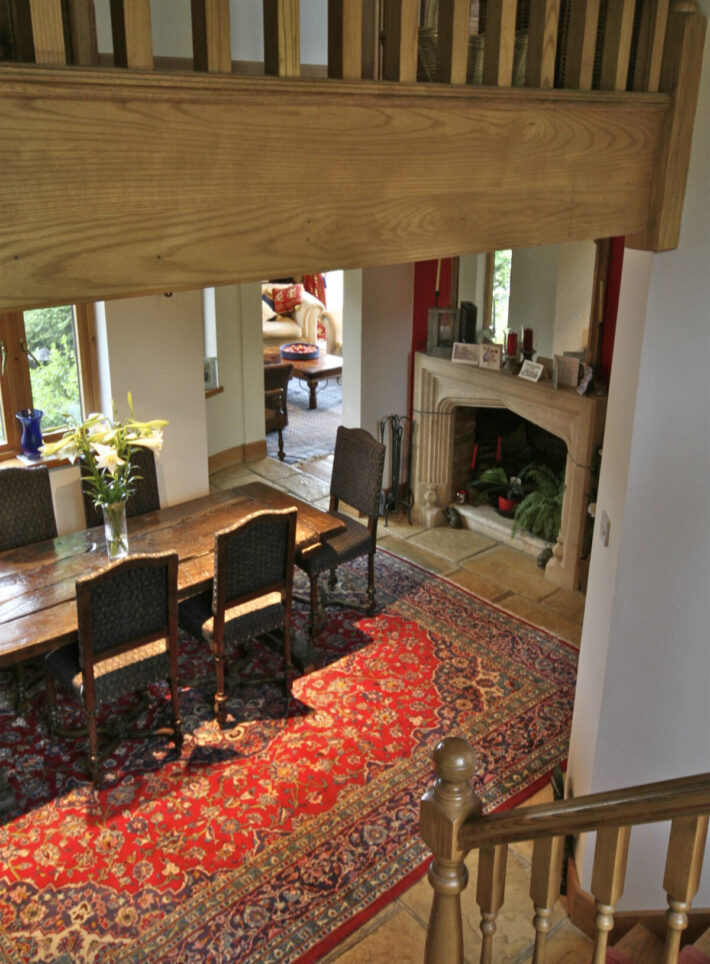 The living accommodation is flexible, furniture being swapped between the living and dining rooms depending on the number of guests the Dohertys are entertaining. The dining room floor has been laid with reclaimed softwood boards and the ceiling decorated with rafters taken from the cottages that were demolished on the plot. The central beam came from a French barn. The house is heated using underfloor heating on the ground floor and traditional oil-fired radiators upstairs. There is a traditional wood-burning stove in the kitchen/family room and a double-backed chimney serving fireplaces in the sitting room, snug and dining room. A solid ash staircase leads to the four bedrooms and two bathrooms on the first floor, and at the side of the house is an extensive timber deck, which is accessed from the dining room through floor to ceiling patio doors.

Tim, Maddy and their children, Jessica, Toby and Georgie, lived on site in a 900 sq.ft. pre-fab home for two years while the planning battle and build were completed. Despite the cold weather in winter, they all found it “a real adventure. We knew we would be there for a couple of years, so we spent time and money making our temporary home comfortable”, said Tim. “To build your own home is a wonderful achievement, but a great commitment too. You have to learn to plan ahead, pace yourself and take the long term view.” 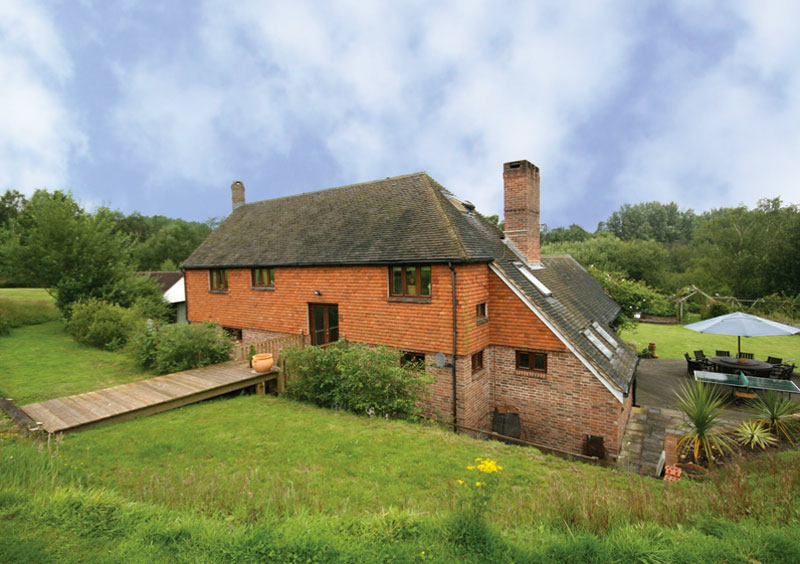