This stunning, contemporary feel home, set in a beautiful location, is completely bespoke yet sits comfortably in its locality. 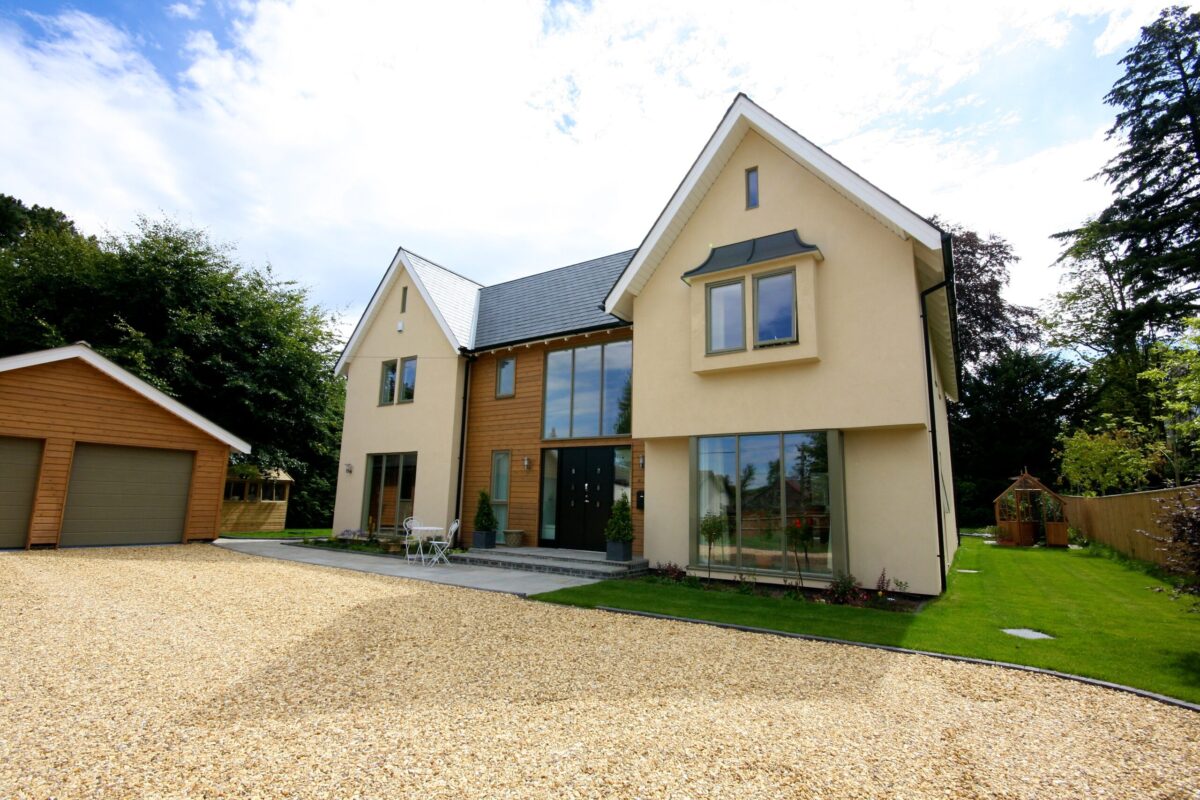 The plot was originally part of the building next door, Hillrise, which for many years was the local maternity hospital, and latterly became a care home. As part of Hillrise’s changes, they decided to sell off ½ acre of the garden which became the plot for Wilde & Hoare’s dream home. 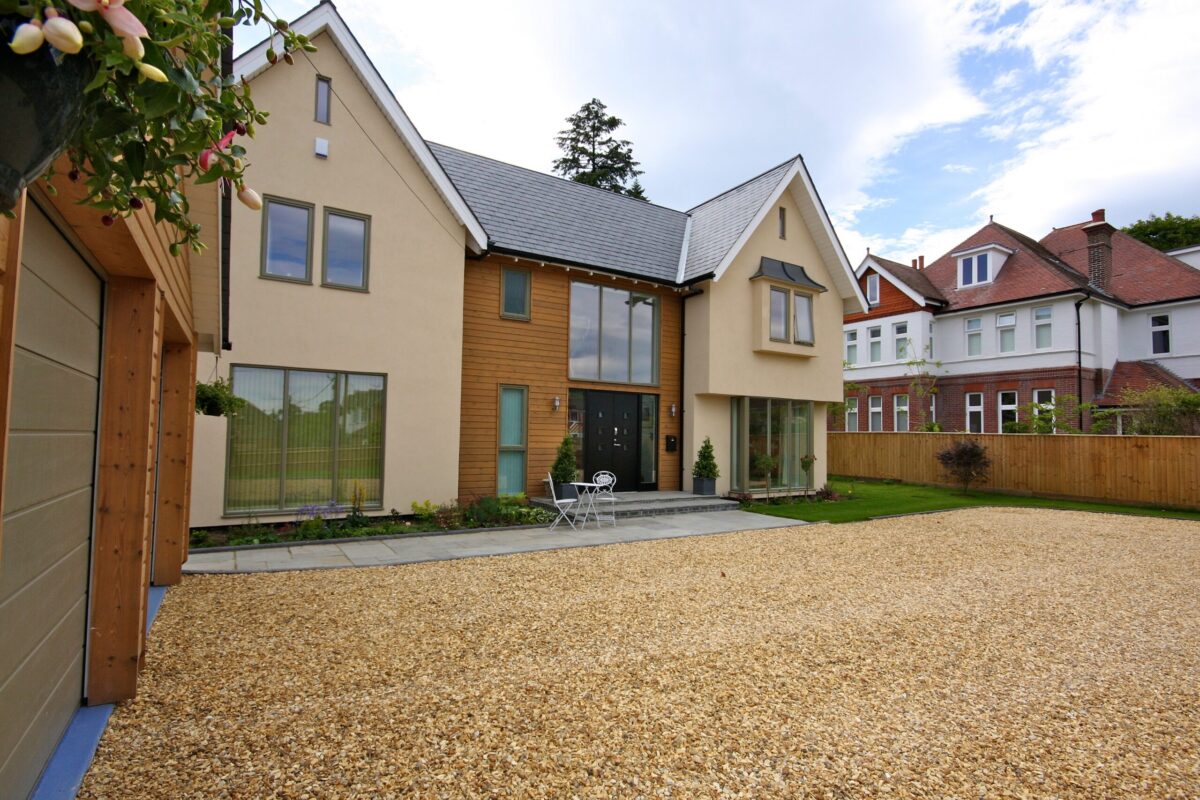 They were keen to build their own home in a location they loved. They looked hard for a plot, even considered Cornwall but felt that would be too far away from where they ideally wanted to live. They searched far and wide but just couldn’t find anything suitable. They started looking at houses on the market and were seriously considering a final list of four when the plot became available. They, of course, snatched it up. 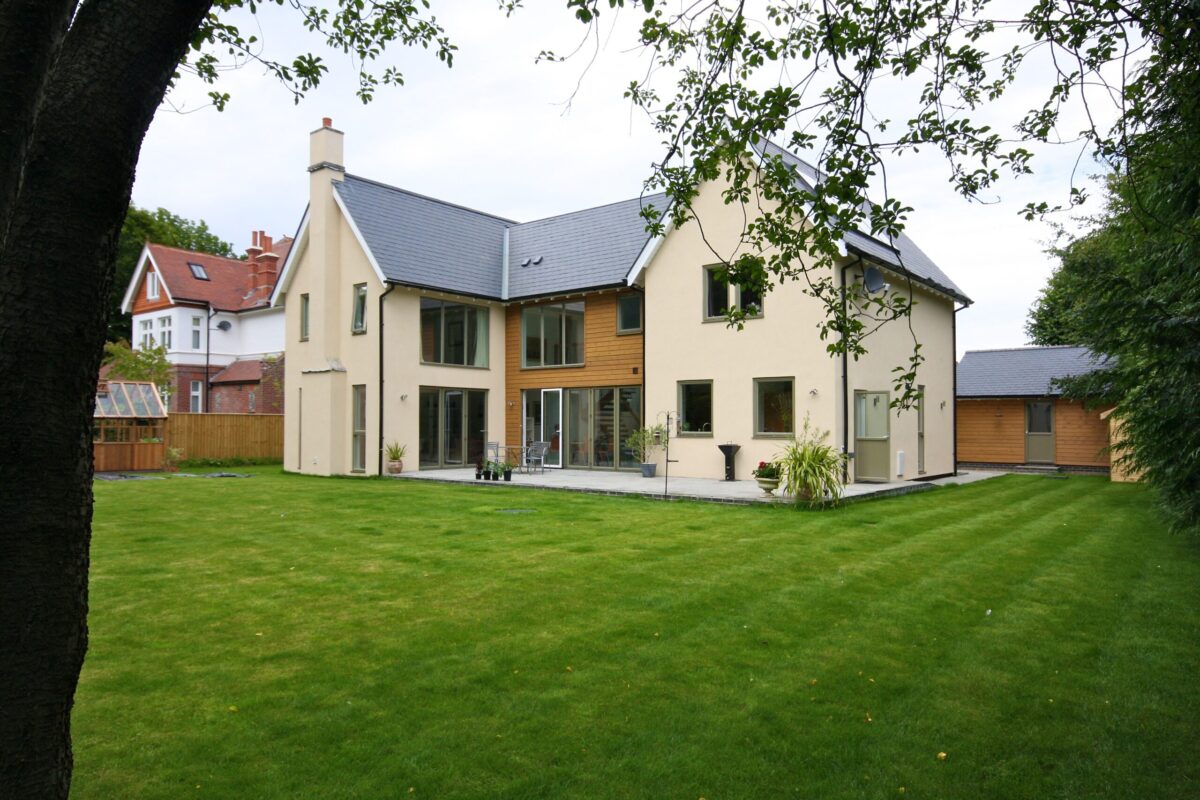 It was obvious from the outset that the home’s design would be dictated by the privacy issues with Hillrise. With this in mind, it was decided to create an L shaped building to provide maximum privacy. The fundamental design was a culmination of features they had seen by browsing through magazines over the years. 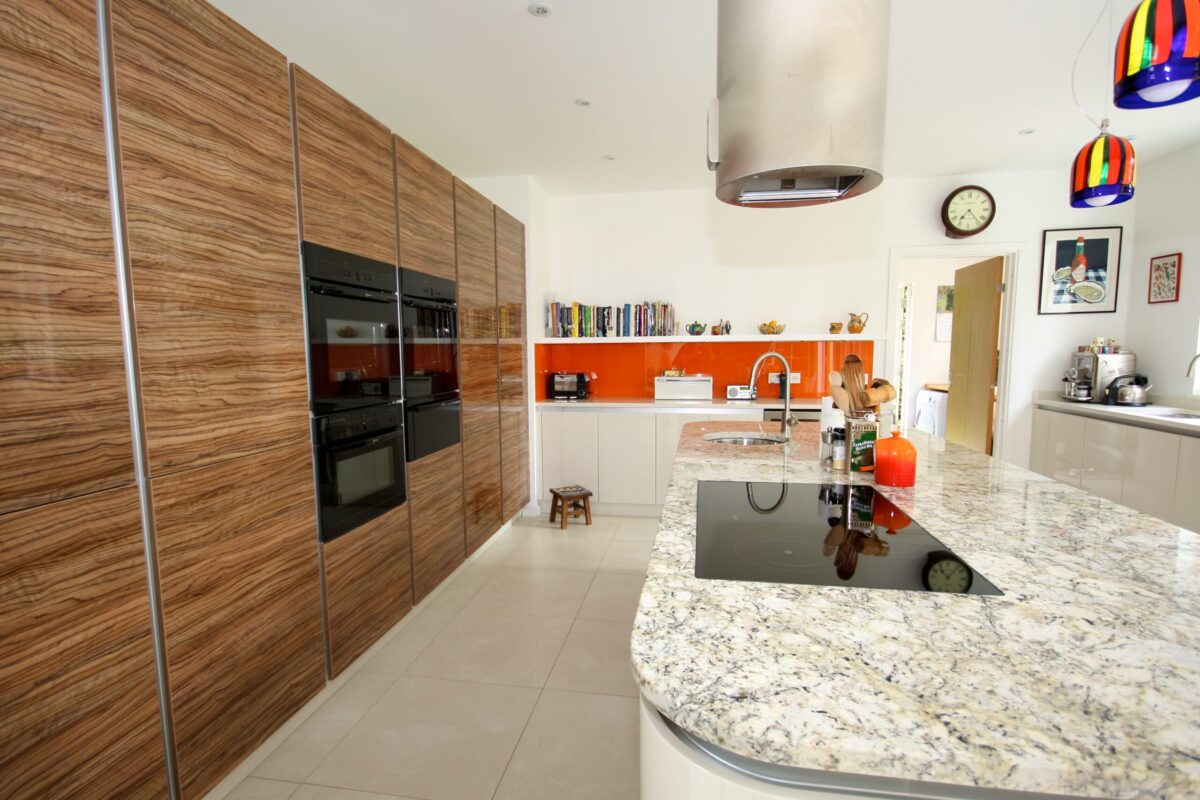 The local planning office ensured the house would be in keeping with the local area. An ultra-modern design was swiftly rejected, but after a redesign of the roof, the end result was front and rear gables with an interconnecting flat roof. A Velux window in the flat roof floods a huge attic room with light and opens electrically for ventilation. They were also restricted by a Tree Protection Order (TPO) on two lime trees at the front of the house and the local tree officer certainly ensured they were fully protected from the building works. The final sting in the tail from the planners was the imposition of an S106 payment as a condition of granting permission. This is a ‘contribution’ to social housing and, in their case amounted to £46,000! 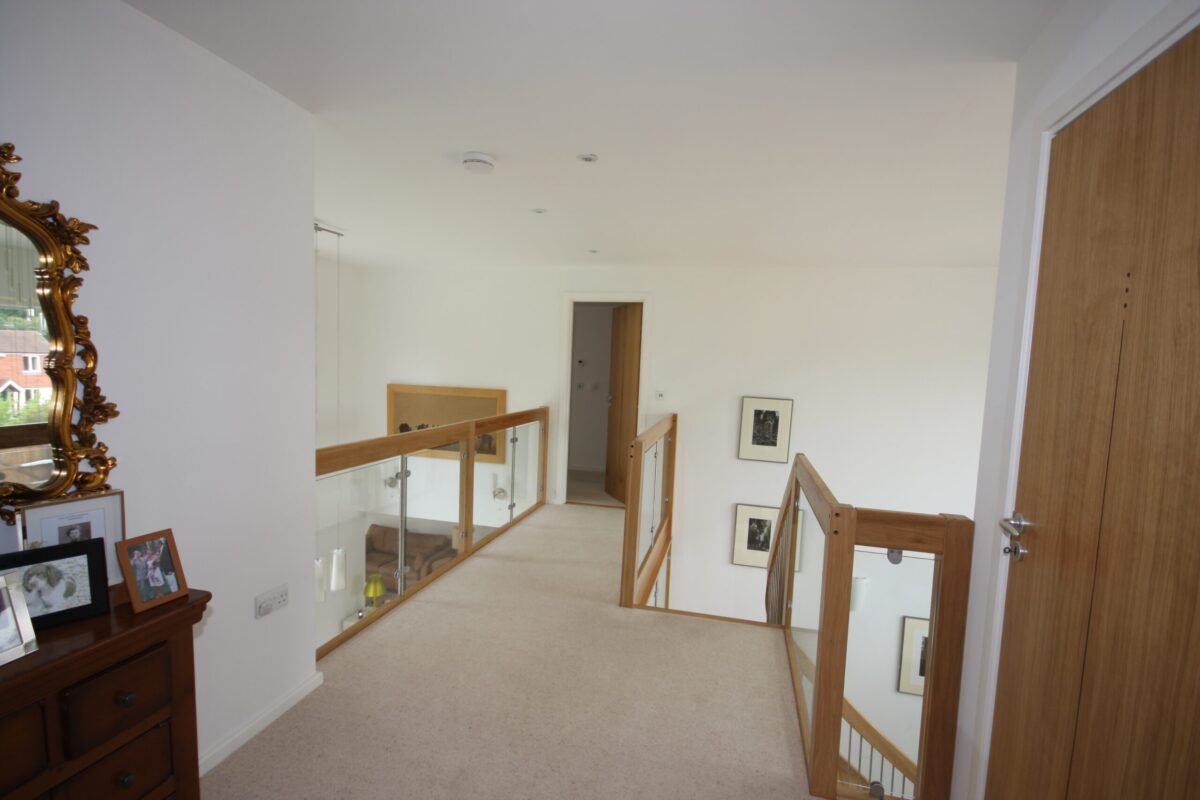 Despite the very wet conditions at the time, the foundations were completed ahead of schedule. With the frame delivered they were able to complete the shell erection in just two weeks. The builder used for kitting out the shell was easily chosen. He had been employed in the refurbishment of Hillrise next door, so his workmanship could be seen firsthand. Apart from sourcing subcontractors, he undertook most of the top-level project management, with Wild and Hoare filling in below. To ensure as much involvement as possible, Wild and Hoare rented a property only 20 minutes away. They were also helped with Wild’s recent retirement, so he was on site most days (when he wasn’t making one of many, many trips to builder’s merchants!) 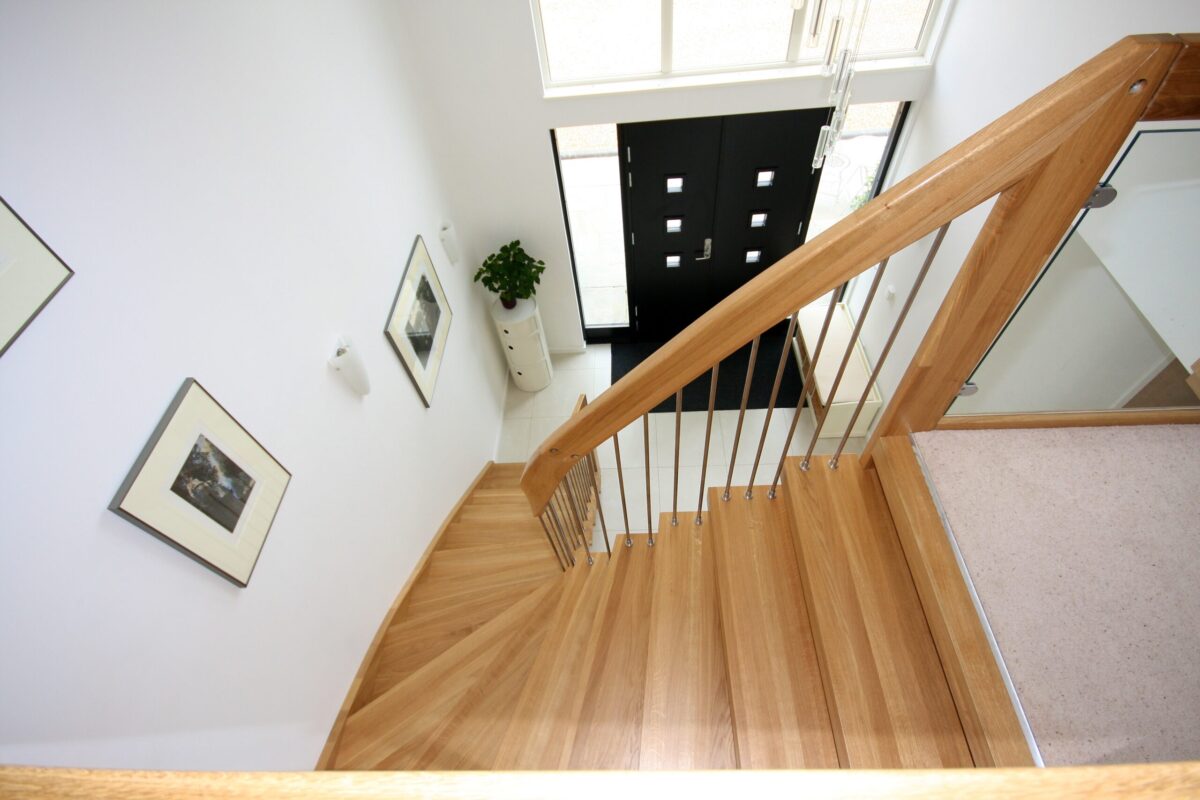 Having completed the kitchen, a bathroom, a bedroom and living room, they moved in nine months after the frame of the house was erected. They recall it all happened very quickly but – as forewarned – they did find it a stressful process. They are thrilled with their design and new home but, if they were to undertake another self build in the future, they would opt for less personal handiwork, partly because one soon realizes it is difficult to match the craftsmanship of the professionals – they’ve seen it all before. They do, however, remember there being lots of highs on their journey, starting with the frame being finished so quickly. They had lots of milestones through things happening that made the house look on track and they remember the excitement they felt with the completion of every major step. 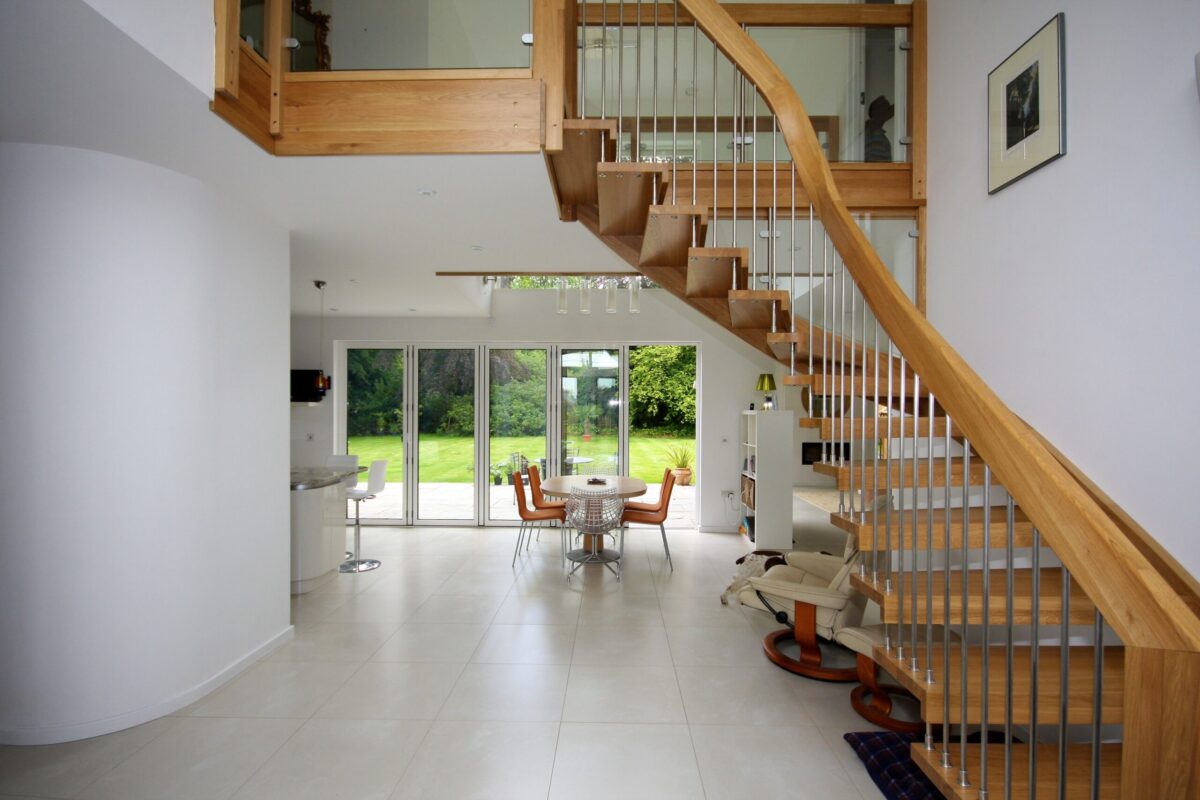 The finished article is absolutely stunning, The feeling of space hits you as soon as you walk through the double front doors: the galleried landing facing you is simply exquisite. The use of curved walls in the open plan living area, softening the interior, was a genius decision. They all combine to give a thoroughly modern finish. There are three stunning bedrooms (and one dressing room), a beautifully designed TV room, with the kitchen and bathrooms finished to the highest standards. They are delighted with the finished product and are now enjoying the comfort and privacy provided by their dream home.