The transformation from tired 1930s house to contemporary self-build is a pretty spectacular one. The stunning new property sits proudly at the top of a hill on the edge of a picturesque Sussex village, backed by the South Downs and faced by the South Coast. 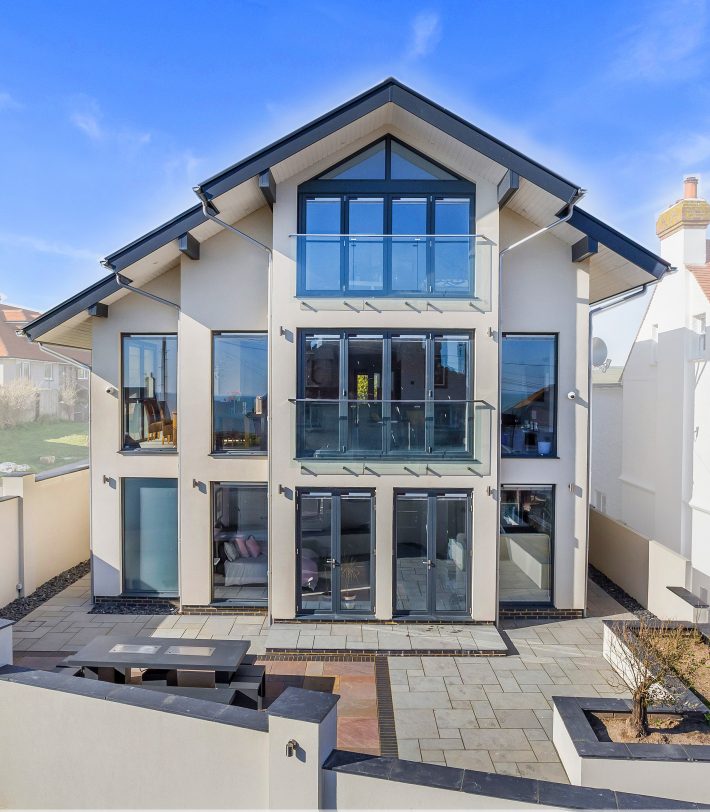 Helen and Richard discovered the dwelling after a three-year search to find the ideal location. With work in Brighton and London, it was key for them to be close to the seaside city with good transport links to the capital. They rented in the area, exploring the villages along the coast to find the right place for them. They came across Rottingdean, a few miles out of the hectic city with a small vibrant community, its own beach and several pubs, and fell in love. 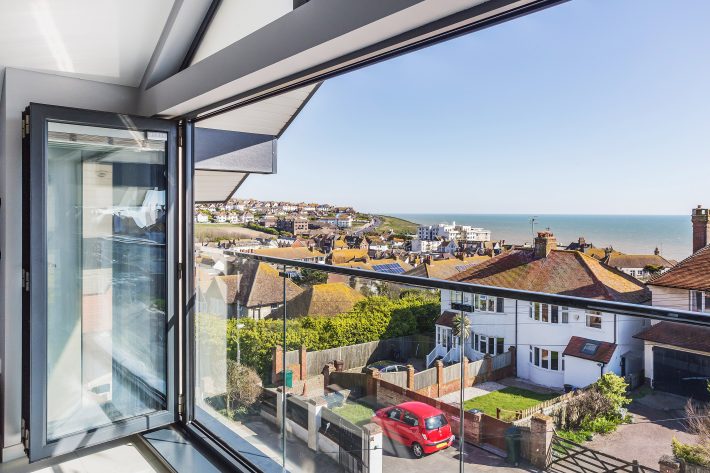 The plot and location were perfect but the property didn’t make the most of the views and needed updating. The couple had the intention to extensively change the layout to maximise the glorious surrounding views and modernise the interior. However, after discussing their plans with several architects, it became apparent that the scheme to extend would be very difficult due to the construction of the home. Multiple structural chimneys made it problematic and drawings were returned that kept very little of the original house. This led them to think of demolishing the property and rebuilding in its place. 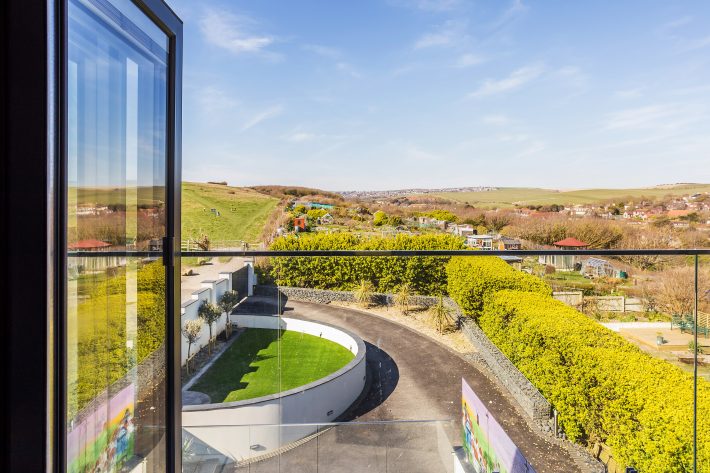 The couple visited homebuilding and renovating shows which introduced them to the idea of building with timber frame. They had heard of a few European companies but with a less than ideal exchange rate and restrictive designs, they looked closer to home. This is how they encountered Scandia-Hus. With a local show home in Sussex, a flexible approach to design and production here in the UK, they knew they’d found the right company to work with. 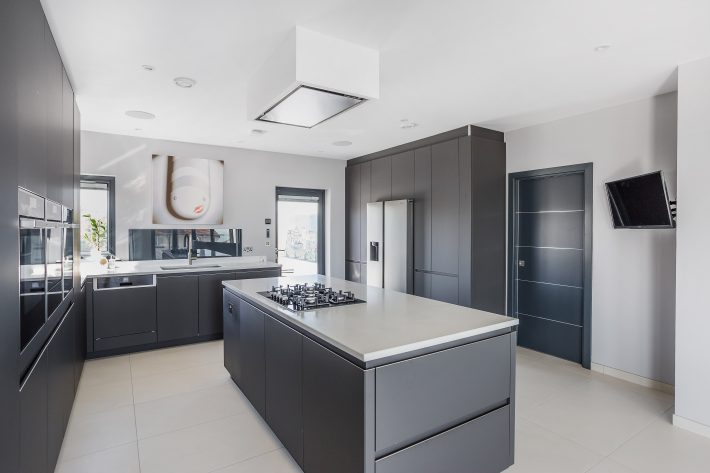 They had never really thought of building a house from scratch before but knew they wanted a modern feel. For them, this meant clean lines, neutral finishes and an open plan feel to living areas. The Scandia Adelia show home epitomised this style and so they began with this design and it evolved from there. 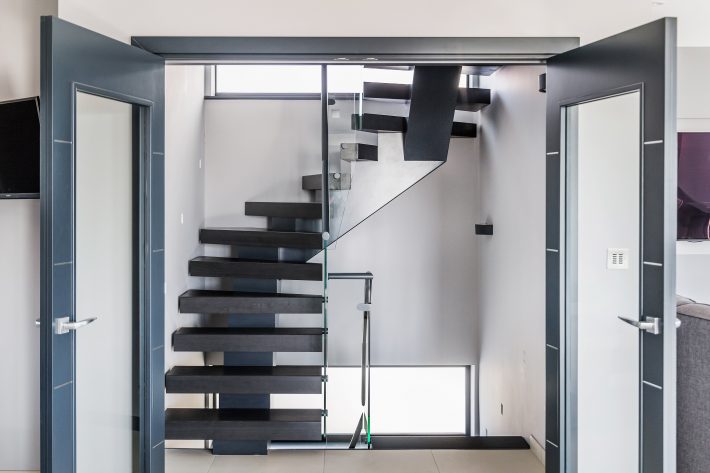 Outsourcing the self-build process to Scandia meant the process remained relatively stress-free for the busy couple. Both Helen and Richard work full-time so the build operated under a turnkey contract with a dedicated project manager from Scandia running the site for them. Scandia did everything from drawing up the designs in-house to the build programme management. The development wasn’t without its challenges, the wind on top of the hill caused many difficulties, every decision had to take into account the marine location and there were some access issues, but the couple didn’t have to directly deal with them as their project manager Aron managed the site completely. They rate Aron extremely highly and he remains their first port of call for anything to do with their new home.

The completed energy-efficient 3,000 square foot home has a striking appearance with Scandinavian influences. Its white render finish is easy to maintain and strong enough to protect the property from the harsh sea winds that its exposed position leaves it subject to. It boasts three floors with four guest bedrooms, the top floor housing a magnificent master suite, gym and study area. There’s an abundance of glass throughout, each window framing a different view of the outstanding location that surrounds them. The couple have chosen modern fixtures and fittings, with grey colour tones used both inside and out. The sleek open plan kitchen / dining / living space is exactly what they had envisaged when they started on their journey. 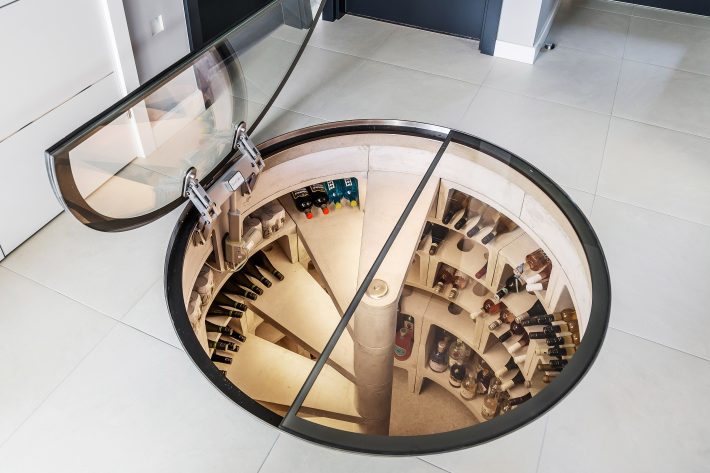 Helen and Richard are glad they took the time to get everything exactly the way they wanted it, from the location search to choosing the right materials, they believe the personal touch and quality is what makes a self-build house unique. 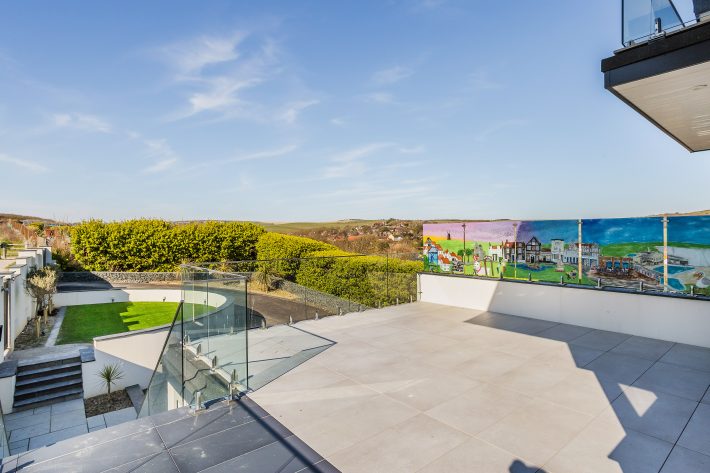 When asked, they are unable to decide which aspect of the house is their favourite – the spiral wine cellar brings them much merriment, the terrace with a mural of the village fills them with joy, and the electric smart glass that allows them an incredible sea view from bed but at the same time affords them privacy has started each day with a little happiness. The three-year search and the year-long build have been completely worth it for the pair. 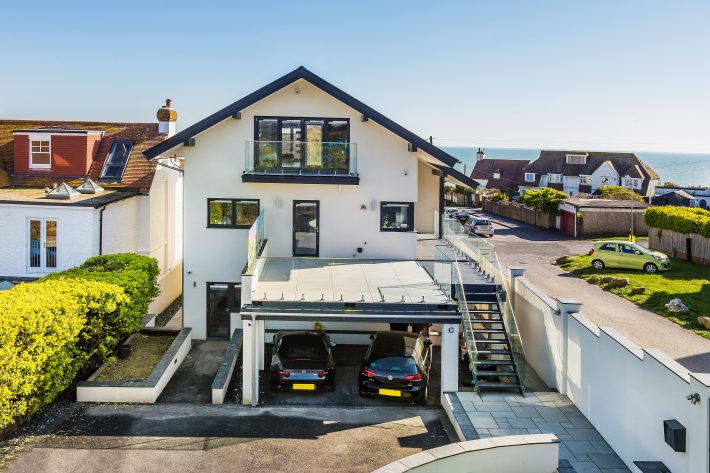