At the end of a rural track, hidden within a wooded hollow, a stunning self-build bungalow sits seamlessly in its spectacular setting. 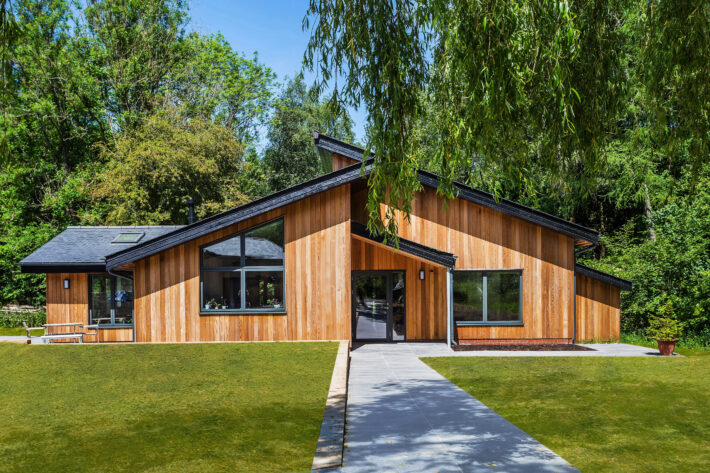 The isolated forest location feels tranquil but is mere minutes from the commuter town of Sevenoaks in Kent, a short distance south-east of the capital. Both an idyllic and ideal site for Paul and Pat Lucas, the pair who purchased the land. 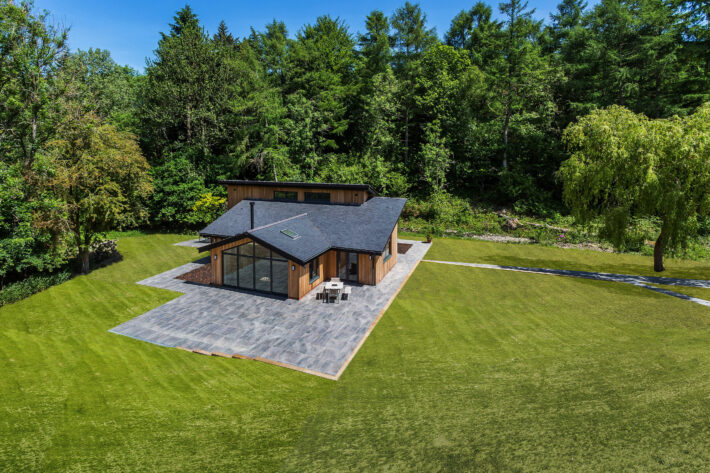 The couple discovered the peaceful plot after exploring various options for their next move, including an Italian barn conversion and a magnificent Majorcan build opportunity. Pat had lived in the area for a while, and knew that although crisscrossed by footpaths, the spot was infrequently visited so when they found a property for sale in such a secluded and picturesque position, they knew they had to buy it. 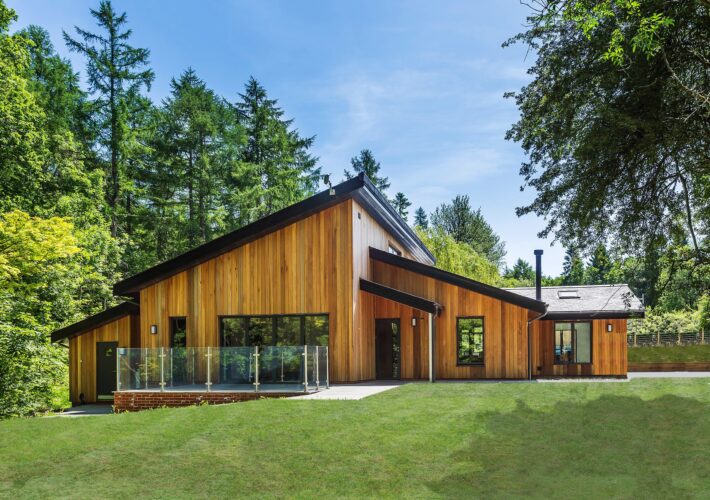 Originally an old and draughty house sat on the site which would not only have been prohibitively expensive to renovate and extend, but they would’ve had to compromise on layouts due to having to work with the existing structure. Consequently, the decision was eventually made to demolish and start from scratch. Paul had previously built a house as well as undertaken numerous DIY projects in the past, so they felt confident in embarking on another homebuilding challenge. 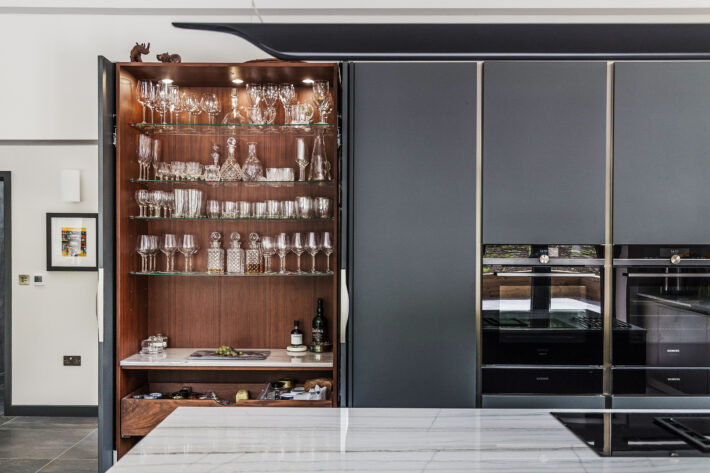 After considering brick and block construction, SIPs and even steel, the couple eventually chose to work with timber frame, as it gave the flexibility of design as well as the levels of insulation they wanted, at a reasonable price. On researching this construction method, the pair encountered Scandia-Hus. 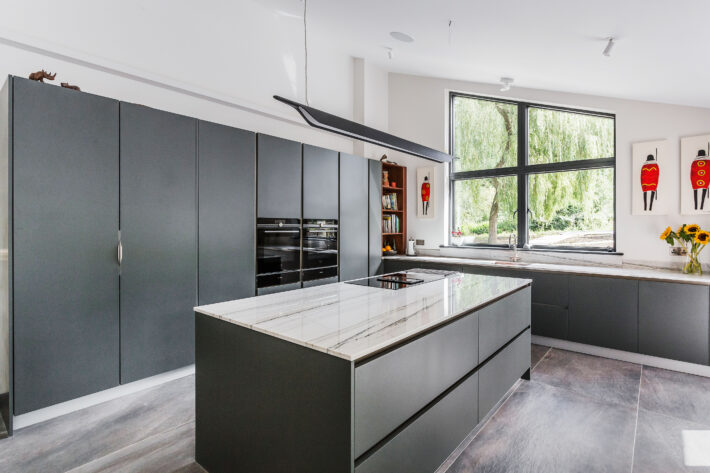 The couple knew they wanted a contemporary home, but were at a loss as to how to achieve it. They visited Scandia’s show home and discussed their struggle with Project Manager Aron who was able to work alongside the firm’s in-house architectural designers to develop a concept. The starting point for creating the unique design was the inclusion of a feature dining table that the couple had acquired that they wished to be the centrepiece of their new home. The striking table is a section of a storm-damaged Acacia tree which is more than 2 metres in diameter and 13cm thick. 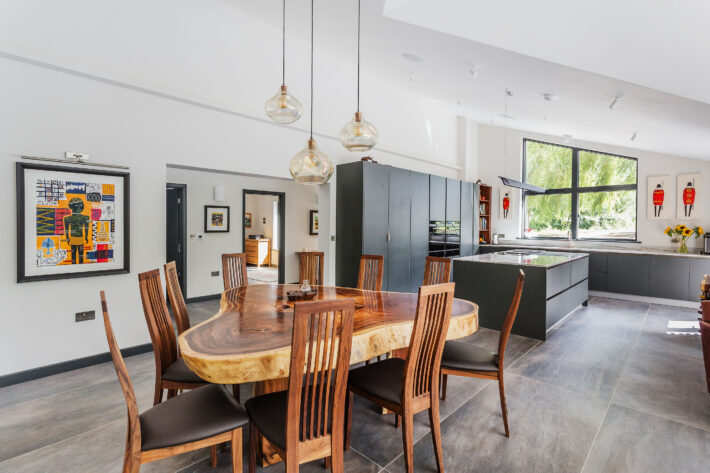 Paul and Pat were initially averse to building a bungalow, but to make the best use of the limited available floor space a one-storey property was agreed on as it removed the need for superfluous stairs and hallways. With the client’s input, a beautiful bespoke bungalow with an unusual roof design and high ceilings that kept within the local council’s strict size of increase policy was proposed. 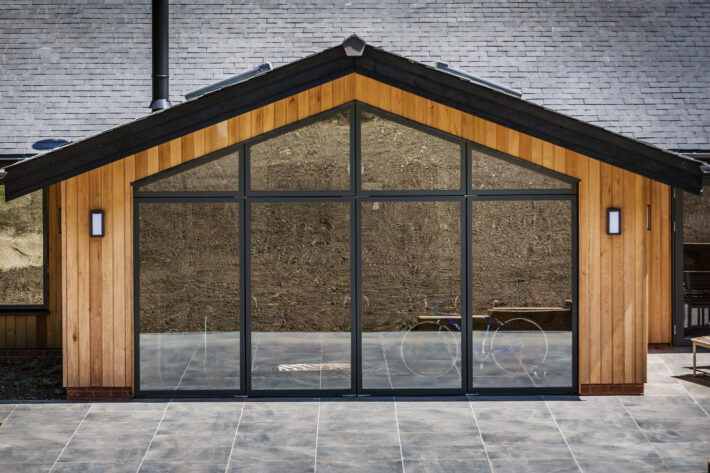 The company were able to take the scheme through the planning process, but as the plot lay within an Area of Outstanding Natural Beauty there were certain restrictions and particular regulations that had to be met to obtain permission. There were minor difficulties with the nature of the roof covering and the “3D-bulk” of the house, but with Scandia’s assistance it was argued that the house was as low as it could be and that it would sit comfortably in the landscape, and a sedum (living green) roof was impractical for a home within a forest as it would become impossible to maintain. 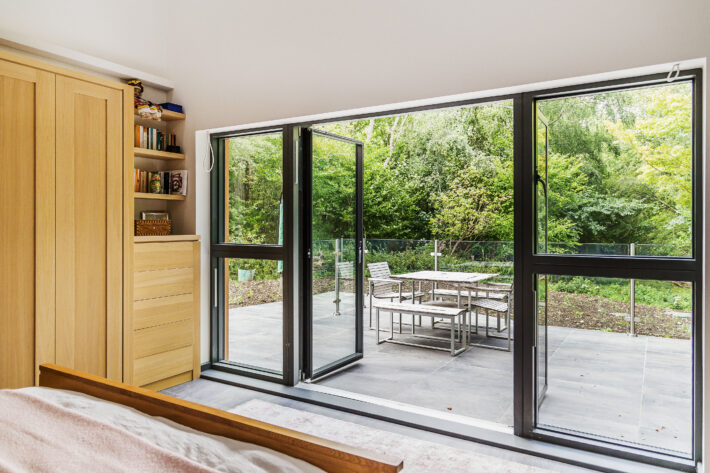 Having received consent, the development was able to proceed, but before building had even begun there were issues to overcome. A straightforward block and beam floor on strip foundations were planned for the groundworks, however, after successively deeper soil tests nothing but clay was found. Later, when doing the boreholes for the ground source heat pump system, it was discovered that the clay extended to more than 95m. It was concluded that piled foundations were a practical solution to move forward. 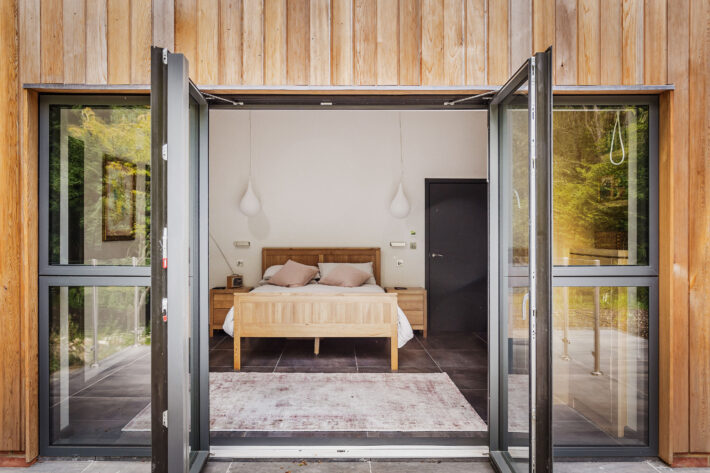 As project manager, Paul sourced local sub-contractors, some of which were suggested by Scandia, but the pair also carried out a lot of the work themselves. As each stage progressed there were invariably jobs that fell between contractors or that were required to facilitate moving onto the next phase. At one point the entire family were on site laying floor insulation! 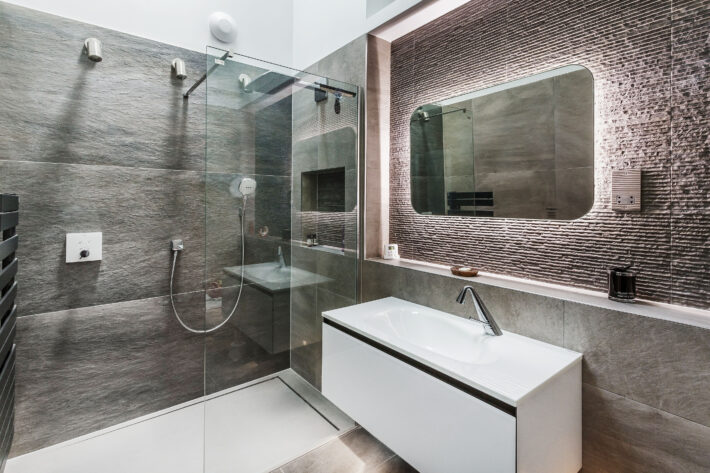 The build took just over a year to complete and the couple agree that the rapid erection of the timber frame was the most thrilling aspect of the process. 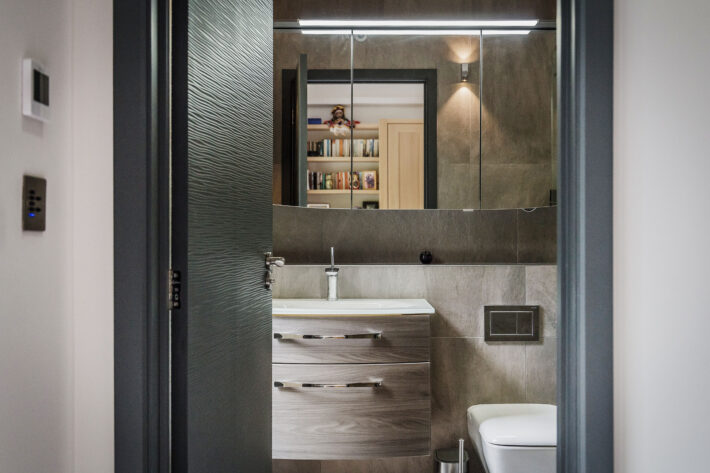 The resulting three-bedroom property is of modest proportions and has been sympathetically designed to effortlessly blend in with the landscape, which was key to the couple. A single storey limits the overall height and a low roofline was incorporated to reflect the surrounding sloping ground. The exterior cedar cladding fits well with the environment as well as keeping the architectural concept contemporary. The bespoke glazing matches the grey colour of the premium quality Spanish slates that protect the roof, as well as framing the wonderful woodland views. The internal layout features an open plan living area with an attractive vaulted ceiling, below which the impressive dining table takes pride of place. 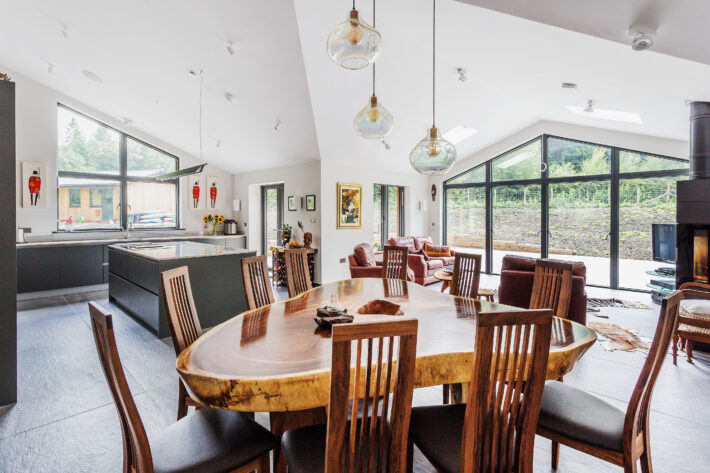 They are extremely proud of the design as each aspect has been meticulously chosen. The couple were driven in their selection of materials by not only the aesthetic but also the durability. Longevity and minimal energy costs were significant factors throughout, and it gives them pleasure knowing that the house is solidly and sustainably built. 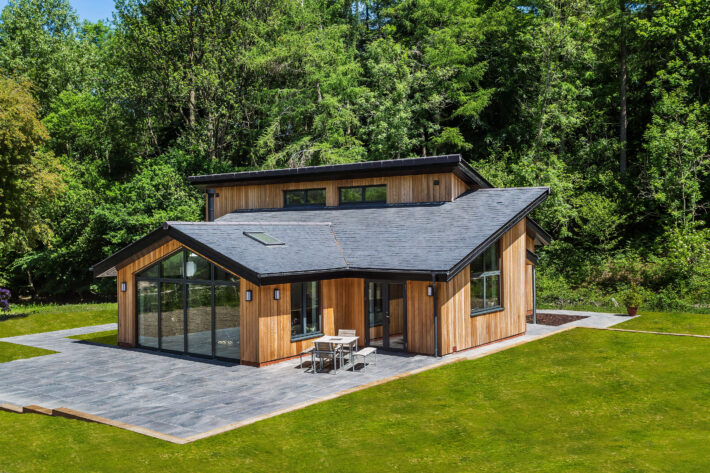 Overall, Paul and Pat conclude that the project management and physical aspects of the build were at times exhausting, but also very satisfying. They have no regrets and would, in concept, self-build again. But they have no need, as they have created their ideal home in an idyllic location and are looking forward to many years of enjoying it together.

To look at this bungalow design in more detail, please click here.